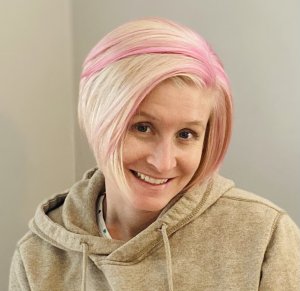 As the 2020-2021 school year comes to a close, Pingree will be saying goodbye to several beloved faculty and staff members, among them theater director Arlynn Polletta. Arlynn has served in this capacity for eight years, her entire time at Pingree, along with having a myriad of other roles.

Members of every theater production staged over the last eight years, including the fall play and the winter musical, have Arlynn to thank for directing and supporting their success. Arlynn talks fondly about the experience building an entire stage outside for “She Kills Monsters” and putting on the show communally through snow and cold. The 2019 fall play, “Wolves,” was also memorable for Arlynn, given the show’s important content and its all-female cast. One of the primary obstacles faced in the last several years by Arlynn, and by Pingree as a whole, has been dwindling participation in arts classes like these, thanks to the combination of factors like scheduling, COVID-19, and school culture. “I really hope – for the new faculty that will come in – that we’re able to generate some real positive energy around getting students into performing arts classes and centering that as a value in our program and in our school.”

The beginning of her tenure included teaching multiple drama-oriented English classes, specifically Shape of the Word,  which became instrumental in the development of Pingree’s later interdisciplinary courses. Since then, the ninth grade arts program has developed and is now taught entirely across the arts department. Arlynn has been a strong advocate for co-teaching and the strengths that the practice brings to any given classroom. “There’s something really powerful about decentralizing teachers in the space,” she says. “I feel very strongly about that. Part of co-teaching is balancing the space in a different way. I love being improvisational.  I think it’s the best way to work, because it feels really well-planned and thoughtful, and it feels spontaneous and supportive. It feels more organic, and like it’s centering the community rather than one individual.” She currently teaches a class called Songwriters and Storytellers, the latest adaptation of the idea.

As one of the faculty members behind the changes to the community education curriculum, Arlynn’s presence in the arts has always extended to equity and inclusion work. Arlynn serves as Pingree’s equity and inclusion coordinator, working with faculty to improve curriculum and other anti-racism initiatives. When asked why she prioritized these goals at Pingree, Arlynn says, “social justice education is a huge part of what I do and what I care about as a human being. As an educator, practitioner, and artist. I’ve always tried to be really thoughtful about the way that social justice education informs my work and my life.”

She also co-facilitates the faculty White Educators for Anti-Racism group, which has met monthly since last summer to focus on confronting privilege and understanding effective allyship. “For a lot of folks, there’s been a heightened awareness that might not have been there before,” Arlynn says. “There was a real need for our white faculty, in particular, to self-reflect in a way that we haven’t done before, in a space that was not putting the work on BIPOC folks in our community. It’s now turning into a more action-oriented space, but we were really trying to make sure that folks were prepared to move into that action step and had done the work to get there.” Talking about the clear interest she has in social justice education, Arlynn says, “diversity, equity, and inclusion and the arts feel very deeply connected to me. Art is a vehicle for social justice, socio-political issues, and identity.”

Because of her deep interest in social justice issues, Arlynn decided in 2018 to enroll in a social justice education program at UMass Amherst. She graduated with an education specialist degree in May of this year. “Pingree was really supportive of that work to more intentionally focus on social justice education and bring that back into the community. It informs my work with other faculty members, and helps to support my work with the Multicultural Development office, and assists with the arts department work as well.”

Given that so much of her impact at Pingree has been involving faculty, Arlynn reflects on how Pingree’s administrative culture has progressed in the years she has been here. As Pingree has grown, the organization and deliberate thought surrounding faculty’s curricular decisions has only increased, with teachers more often than ever checking with Arlynn’s and Dr. Spooner’s office to understand how to best serve social justice work. “Now it feels more cohesive. People are really reaching across different departments and seeking out support, which I think is a really important part of a curriculum overhaul in connection with DEI.”

As Arlynn graduates and a year of COVID-learning comes to an end, a natural time of transition has arrived to make a sweeping change, personally and professionally. This summer, Arlynn and her family are relocating to Vermont where Arlynn will start a new job as diversity, equity and inclusion manager at the Aloha Foundation. The Aloha Foundation provides summer camps and education programs emphasizing simplicity, the outdoors, and living in community. This new professional opportunity will allow her to center her passion for social justice education in a community of creative, adventurous people.  Still, she will miss Pingree a great deal.

As a lasting reflection on her time at Pingree, Arlynn emphasizes, “in addition to the lovely relationships with students and alumni, the relationships that I’ve built within my department and across departments with other faculty members have been wonderful. I think it’s really unique for a work environment that the people that I work with are also my friends, or in a lot of ways, an extended family. It’s going to be very hard to leave them.”