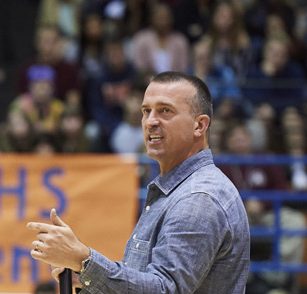 On Thursday, November 4, Pingree students and staff members viewed Chris Herren’s film, The First Day, in an all-school assembly. Chris Herren, a former professional basketball player, is now a motivational speaker after his struggles with substance abuse derailed his life. The First Day briefly details Herren’s battle with drugs and alcohol, but more importantly, expresses how addiction can start from the first day of substance use. The presentation of the film was seen by many community members as an attempt by the Pingree administration to warn students about the risk of substance abuse, and to bring attention to the ways in which people worldwide are impacted by the use of substances, harmful behaviors, and other mental health issues. Despite the positive intended message, the exhibition of the film was met with a seemingly unanticipated strong reaction by Pingree students.

It is clear that after viewing, Herren’s film had a severe impact on members of the Pingree community. Many Pingree students, deeply affected by the content of the film, excused themselves from classes for the remainder of the school day to reflect individually, while other students conversed with friends, advisors, and trusted staff members to explore their feelings regarding the challenging, complex themes of the film. Still others were left without a safe space to process, with having to return to class immediately after and resume the school day following a difficult, intense hour.

On the afternoon of Wednesday, November 3, students watched a brief preview of The First Day with advisory groups, yet many students still felt unprepared for the intense, heavy subject matter discussed in the film itself. Several students expressed their desire that topics such as severe mental illnesses, self-harmful behavior, and graphic descriptive imagery presented in the film be prefaced with trigger warnings by Pingree administrators. The absence of a trigger warning was a common criticism of the presentation of the film for a lot of Pingree students, and it may have caused the intensity of the student reaction to be amplified even further.

“We were not adequately prepared for the subject matter. I was especially unprepared for the discussion of topics such as self-harm, suicide, and depression,” an anonymous eleventh grader expresses. “[the Pingree administration] did not warn people about topics that are obviously prevalent. This might be due to the fact that Pingree is unaware that some students may be experiencing self-harmful behavior or are suffering from poor coping skills, but it is not okay to refrain from warning someone about triggering instances in the film, such as self-harmful gestures, when you don’t know what they have personally been through.”

Since the film proved to provoke a wide range of reactions, it was important to gather the opinions of a range of students, including Pingree’s newest community members. For members of the freshman class, who have only attended Pingree for two months, the contents of the assembly were “shockingly eye-opening.”An anonymous ninth grader seemed to be grateful to finally be part of a community that puts emphasis on mental wellness and the implications of substance use. However, they expressed that although they think that the themes of the film itself were valuable, and that many lessons were learned, the administrative framing and structuring of the assembly could have been improved.

“I feel that it would have been beneficial to have time after the assembly to be alone, even just for a few minutes to reflect independently. I think that this time built into the schedule would have helped students to unravel their personal understanding of the subject matter. We could have had the opportunity to contemplate more deeply about the heavy topics of the film, ” the freshman expresses, addressing the day’s schedule, which required students to attend classes directly after the school meeting. However, they acknowledged that many teachers reacted sympathetically upon noticing the fragile mental state of some students: “After the assembly, some people were really upset and scared, but a lot of teachers were really understanding and allowed students to take time for themselves as needed.”

The call for trigger warnings and more processing time was echoed by a third voice. This sophomore recalls the unexpectedly emotional experience of viewing the film, and the impact it had on them and their peers. They reflect that “we definitely should have been briefed more, but it certainly was effective, just maybe a little bit too much, too harsh, and intensely emotional … it delved into mental health, suicide – it was very triggering for some people.” They extend their criticism to the overwhelming nature of the presentation and the tone of the film. In this student’s experience, “it was a lot, and I don’t think we were prepared enough for that. In a setting where you’re sitting with five hundred people, it can be very intense to watch that. I don’t think it was appropriate the way they handled it … this definitely got the message across, but that doesn’t mean it wasn’t flawed in the presentation of it.” They even describe talking to another student after the assembly who felt “targeted” and “guilted,” and had difficulty attending class immediately afterward.

Although the different reactions of students to Thursday’s presentation of Chris Herren’s film were varied, we can appreciate the conversation around substance abuse and mental health that has been stimulated because of The First Day. Some topics in the film were found to be sensitive, but the themes of reducing stigma around mental illness and the act of seeking help will always be important in initiating discussion at Pingree. It is believed that the film was shown to students with the overall intent of opening dialogue around personal struggle, and taking a further step to better the Pingree community.

Junior class representatives Frankie Kennedy and Caitlyn Dion made an announcement to the sophomore and junior classes on Wednesday, November 10, acknowledging the weight of struggle. Their empathy can be extended to the greater Pingree community as we all take time to reflect: “Even though Pingree is an incredibly welcoming place with incredible resources, it can sometimes feel like we have no time to cope with our feelings… We hear you. We see you. And we are here for you. Your feelings are valid, and we can promise you that you are not alone in your battles, and we are here to support you and pick you back up.”