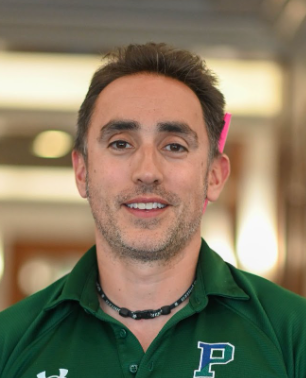 Mr. Finch has been teaching at Pingree for the last eight years as a both history teacher and coach on the lacrosse and basketball JV teams. Every single day for the past eight years he has brought passion, enthusiasm, fun, and collaboration to Pingree, and I’m lucky enough to have experienced this passion as one of his players on his JV lacrosse team. Though I wasn’t lucky enough to be in one of his history classes, many of his students have told me that not only is his class one of their favorites but it is a class where they have learned to become independent thinkers and very good writers. On the field, Coach Finch was a strong believer in having fun anytime you step on the field. Sometimes this could mean playing ultimate frisbee or handball instead of practicing or even “forgetting” to warm up before every game and instead, putting on enormous amounts of eye black or just standing around making jokes. Either way, with Coach Finch as the coach of the JV lax team, many teammates as well as myself would say that playing under Finch was one of the best sports memories we will ever have.

Sadly, Mr. Finch is leaving Pingree next year. He says that as of now he has “No official plans yet but [his] hope is to continue learning, growing, and making a positive impact.” He also hopes “to leverage [his] tech skills with something related to education, civics, or health and wellness.” Wherever Mr. Finch goes he’s going to do a great job, and though Pingree is losing a lot with Mr. Finch leaving, we know that he will make a positive impact wherever he goes.

Though Mr. Finch is excited to see where he will go he is also sad to leave the Pingree community. “Leaving Pingree honestly feels a bit like leaving home,” he says, “I will certainly miss the people here which feel like family.” With the amount of time he’s spent at Pingree and the number of people he’s met, he also has many memories which he will cherish long after leaving. Some of his favorites are coaching basketball and lacrosse, counting ballots during mock elections, and going on trips such as going to Rosebud, Taiwan, and Model UN.

As a final note, Mr. Finch wants Pingree students to remember that there are two main reasons why our society values education. “One is to make you more independent. The other is to encourage dependence on fellow citizens.” He believes that it’s important to have this independence and dependence to “make decisions that [are] best for society as a whole rather than selfish personal interests.” By following these words by Mr. Finch we can create a stronger community in and outside of Pingree. I think I can speak for the entirety of Pingree when I say that we’ll miss you, Mr. Finch. Thank you for all you’ve done.